PowerDirector Ultra is a low cost video editor which is quite easy to use. Notwithstanding the low pricing, it is a good alternative for those who are not acquainted with video editing yet, because the learning curve is much lower than the professional packages like Adobe Premiere or FinalCut Pro. In this article, I share my findings using the software. 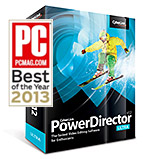 Out of the box, the software has a lot of features on board which help you to create videos using a mix of video footage and images. It is also possible to make a video just using images and sound. Since there are many transition effects, you can produce an engaging video with PowerPoint screenshots, for example. A transition is an animated effect in between 2 images or video clips to smooth out the changes which otherwise would be quite abrupt.

To test the user friendliness of PowerDirector, I started to use the Full Feature Editor right away, without viewing any help files or video tutorials. It was surprisingly easy to use, although I made an error here and there. Therefore, my example video is a bit rough, but if gives an impression what you can do using a couple of images and a short video clip. This example is saved as a HD video 1280×720 pixels, MP4 with a variable bitrate of 3000Kbs. The video is iPad compatible, which is not always evident since iPad requires certain encoding settings which are not met by all video editors:

Above I combined a video with static images and added transitions, effects, subtitles and an audio file. Although this is a rough example, I think you get the idea. This is good software for entrepreneurs and teachers who want to create low cost video tutorials. It is also useful to video enthusiasts who do not want to spend over $700 or more on professional video editors. It only took about 15 minutes to produce this sample. To give you a feel how this video editor works, view the short tutorial of Cyberlink, the authors of PowerDirector:

Then you are asked to install SmartSound. Click Yes, because it is an essential part of the software.
One annoying thing after installation is that the software asks several times to set a cookie on my computer. I regard this as an invasion of my privacy and it serves no purpose to me. Denying cookies does not influence the use of the application, so I block those cookies.

Using the software for the first time

The first time, PowerDirector opens conveniently a demo project with images and a HD video. Strangely enough this video is in WMV format, which is not the best choice since that format isn’t widely supported, certainly not on the internet. However, it is not a big problem, just be aware that you do not use this format as your final production if you plan to publish your videos online.

When you import a video, you are asked to enable shadow files. If you do not have a lot of horse power on your computer, this is recommended. For testing, I use a HP Pavilion Entertainment PC (laptop) with a AMD Turion II Ultra Dual-Core Mobile M620 2.50GHz processor, 4GB ram, 64bit Windows 7.
So, I turn it on. It gives slight distortions in the preview window, but this setting makes no difference for the end product. You can set this per project if you want.
The preview window shows the video in real-time without stuttering. I like this very much because with Adobe AfterEffects, this is not the case. You can only render a part of the video in order to hear the sound and the quality of playback is much lower than PowerDirector Ultra.

The first time I tried to produce a video, the software crashed. This was my fault, because I had Photoshop open, which reserves part of the RAM and I only have 4GB. 😉
After closing all other applications, I had no further problems whatsoever. On general, it is best to quit all other applications when you use a video editor because they need as much RAM as possible in order to render the video as quickly as possible.

As said earlier, using the software is quite intuitive. You can drag an item from the Media Content panel into the timeline (as with most video editors) and reposition its location in time, add images, audio, etc.

On the left hand pane there is a set of icons for the various effects and transitions. The Effect room contains a series of effects which you can set on an image or a video.

You can staple as many effects on the same object as you like. I did not realize this at the start and thought wrongly one effect would remove the previous. To undo this, you go to the Effects button while having the object selected, and then deselect an effect to remove it from the object.

NOTE: I would use effects with caution because most of them are a distraction without serving a real purpose. It may give you a “wow” effect the first time, but it may trigger a “yawn” effect with the spectators of your video. Nevertheless, there are a couple of excellent effects and transitions which are worthwhile to explore.

Although you can create subtitles for your video, it is generally better to work with an external file so that you can also use it on YouTube or on your own site. Luckily, the editor has the option to export subtitles to .SRT, which is a format of subtitles. For those of you who need another format, here is a tutorial of various formats for subtitling.
Since you work directly in the video editor, you can see the subtitles immediately and tweak the duration. This is quite a time saver, compared with writing subtitles by hand.

Voice-over means adding a voice recording to you video. PowerDirector Ultra 12 makes it very easy to add voice-overs. This means that you do not need to quit the application and use other software. When I make video tutorials, I generally do not record my voice while I create screen captures (Camtasia for windows, ScreenFlow for Mac), so that I can concentrate on the mouse movements, the order of events, etc. I record voice-overs afterward and import those audios into Adobe AfterEffects. If you work that way, you may find this feature priceless.

The voice-over feature is very easy to use. You just hit the recording button (red light) and talk. When you hit that button again, it generates the audio and saves it in the Media content panel, ready to drag into your timeline.

With voice-overs you may need to reduce the background noise in the audio, unless the voice is recorded in a sound studio. It depends on your recording equipment, of course, but voice recordings with headsets often contain static noise.
When you right click on an audio in the timeline, you can edit the sound by selecting the sound editor installed with the software. In this case it is WaveEditor.
Although this round-trip functionality is very useful, the noise reduction tool of WaveEditor can only handle faint static noise.

Producing the video is quite simple. You chose a preset and off you go. In practice, you will want to create a custom preset for online streaming MP4’s because the bitrate in the MP4 preset is too high for this purpose (6000Kbps).
The encoding types for custom presets are a bit limited. For example, if I chose MP4, the minimum bitrate is 3000Kbps. If you want your video to stream over the internet, this can be a problem in areas with slower internet connections, like Africa, parts of Asia and Australia. However, there is a tradeoff here, the lower the bitrate, the lower the quality.
So, if you are in an area with a slow internet connection, you may want to use a workaround by setting the quality as high as possible and then convert the video via HandBrake for streaming. But in general, a bitrate of 3000Kbps is acceptable, although I prefer using 1500-2000Kbps. A stuttering video is more annoying then lower quality.

Although this software is cheap, it has many possibilities which you also find in high end editors, with the difference that PowerDirector is easier to use. However, to be fair with professional video editors: “Easy to use” means also “Limited”. But limitation can be overcome by creativity. Although the software is intuitive, tweaking effects is not that simple, and I have to say, many effects are somewhat dorky. Soon, you will find yourself using just a small selection of effects and transitions and stick with them. However, PowerDirector is made for a wide range of users, so they try to provide as many effects as possible to have something for everyone.
The timeline does not offer the same functionality as the pros but this software is excellent to quickly produce engaging video tutorials, promo videos, home movies, and so forth, without prior knowledge of video editing.
I find the Subtitle editor a great addition to the package, and on general, PowerDirector Ultra 12 performs well, even on older laptops. Therefore, this software gets a 4 star from me.

Many thanks to Jonathan Blain for giving me a tip on this software!

Please note that I do not give support for PowerDirector. Contact the support section of Cyberlink instead. However, if you want to give your opinion on the software, it is much appreciated. 😉